Companies like iPhone maker Foxconn to car manufacturer BYD have come forward to make protective gear as Xhina grapples with a shortage of medical equipment to prevent the novel coronavirus from spreading. 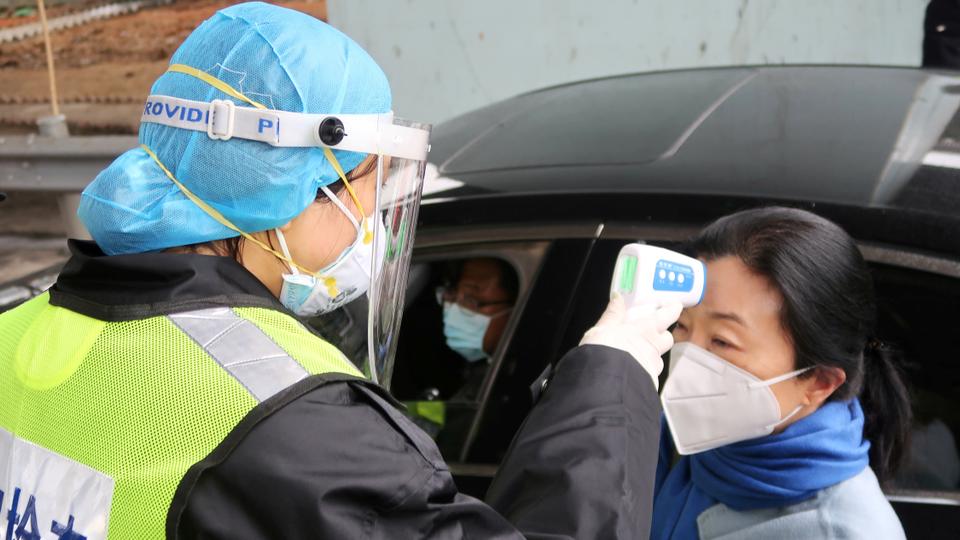 FILE PHOTO: A security officer in a protective mask checks the temperature of a passenger following the outbreak of a new coronavirus, at an expressway toll station on the eve of the Chinese Lunar New Year celebrations, in Xianning, a city bordering Wuhan to the north, Hubei province, China on January 24, 2020. (Reuters Archive)

A diaper manufacturer in eastern China was closed for the Lunar New Year holiday when it heard from officials – China needed vast amounts of masks to fight a deadly virus epidemic and factories needed to chip in.

In just over two days, New Yifa Group converted a manufacturing line in Fujian province to make face masks, tapping some of its materials that would have gone into hygiene products.

"All our staff are working on the masks now," the group's vice president Shen Shengyuan told AFP in a phone interview.

He added that the line can produce up to 600,000 mask pieces a day, and the company is looking to convert another nappy production line soon.

Companies across China – from iPhone maker Foxconn to car manufacturer BYD and garment factories – have made similar forays into protective gear as the country grapples with a shortage of medical equipment to prevent the virus from spreading.

To date, the virus has killed more than 1,350 people and infected some 60,000, sparking fear across the globe and causing people to stock up on protective supplies.

Authorities said this month that China urgently needed masks, especially at the epicentre of the crisis, Hubei, where doctors face a shortage.

At full capacity, Chinese factories can only produce around 20 million masks a day.

While over 76 percent of mask producers and 77 percent of protective suit makers had resumed work as of February 10 in 22 regions, there remains a serious shortage of masks and other protective supplies, officials said this week.

Doctors on the front line in Wuhan – the epicentre of the outbreak – have had to see patients without proper masks or protective body suits, resorting to reusing the same equipment.

Manufacturers are stepping up, but this comes at a cost, with New Yifa Group postponing a $6 million order to focus on mask production.

But Shen is confident the local government in Putian city, where the firm is based, will help companies like his tide over.

In other cities such as Ningbo in eastern Zhejiang province, 14 garment manufacturers are looking to produce a million masks in 20 days, reported Xinhua on Wednesday.

Chinese automaker BYD said in a statement that it was looking into the design and making of protective gear, to produce masks and disinfectant.

BYD expects to make up to five million masks and 50,000 bottles of disinfectant a day by the end of the month.

It plans to start mass production by Monday and told AFP the masks will go to hospitals and seriously-affected areas, among others.

Others that have stepped in include a General Motors venture in China, SAIC-GM-Wuling, and China Petroleum & Chemical Corporation (Sinopec).

Sinopec said on China's Twitter-like platform Weibo on Sunday that it was setting up 11 production lines with partners and targets making up to over a million masks a day by March 10.

It expects to make up to two million masks a day by end-February.

The masks will be supplied to its own workers, and can be distributed externally where needed.

Trump's $4.8 trillion budget likely to get thumbs-down from Congress