Donald Trump's signed message in the visitor's book at Mahatma Gandhi's Sabarmati Ashram in Ahmedabad on Monday stood out with no mention of India's freedom movement icon.

New Delhi: US President Donald Trump's message in the visitor's book at the Mahatma Gandhi's memorial in New Delhi on Tuesday mentioned the Independence movement icon, a day after the American leader's note at Sabarmati Ashram in Ahmedabad left many surprised.

Mr Trump and First Lady Melania Trump paid homage to Mahatma Gandhi at his memorial at Rajghat, laying a wreath shortly after a ceremonial reception at the Rashtrapati Bhavan.

The US President signed the visitor's book, writing, "The America(n) people stand strongly with a sovereign and wonderful India - the vision of the great Mahatma Gandhi - This is a tremendous honor!" 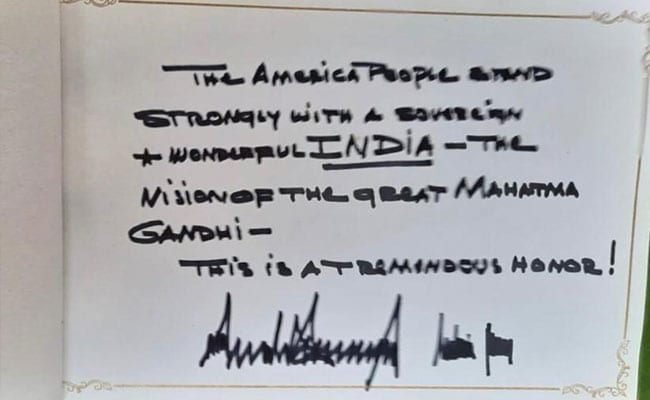 Mr Trump's signed message in the visitor's book at Mahatma Gandhi's Sabarmati Ashram in Ahmedabad on Monday stood out with no mention of India's freedom movement icon, instead thanking "my great friend Prime Minister Modi" for a "wonderful visit".

Many contrasted Mr Trump's note with that left by his predecessor Barack Obama in 2010 in which he had written: "I am filled with hope and inspiration as I have the privilege to view this testament to Gandhi's life. He is a hero not just to India but to the world."

Prime Minister Narendra Modi was seen showing around the Trumps at the Sabarmati Ashram and telling them about the charkha. PM Modi also presented a memento of Mahatma Gandhi's "Three Wise Monkeys" to the US president.

The US President arrived in India on Monday for a lightning visit featuring a huge rally at the world's biggest cricket stadium and other high-profile photo opportunities, but likely short on concrete achievements.

On Tuesday, Donald Trump is expected to hold extensive talks with Prime Minister Modi, address a news conference in the evening and attend a banquet hosted by President Ram Nath Kovind before flying out at 10 pm.